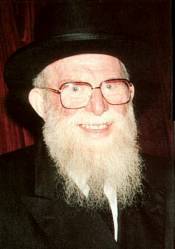 Maran Hagaon Rosh Hayeshiva Harav Chaim Yaakov Goldvicht, zt"l, was born in Jerusalem and educated from childhood in the age-old Jerusalem Yeshiva "Etz Chaim" under the spiritual leadership of the revered sage and Gaon, Rabbi Isser Zalman Meltzer, zt"l. Even when young, he already had acquired a distinguished reputation among the great Talmud scholars of the Jerusalem Yeshivot. All of his years in the Holy City were spent under the fatherly guidance of Rabbi Yitzchak Zev Soloveitchik, zt"l, the Brisker Rav.

Rav Goldvicht, zt"l, married Rabbanit Miriam, z"l, daughter of the sage Rabbi Joseph Berkowitz, zt"l, one of the great Roshei Yeshiva in Poland before World War II. They moved to Bnei Brak where Rav Goldvicht, zt"l, studied under the Chazon Ish, zt"l, and was also close to Hagaon Harav Isaac Sher, zt"l, Rosh Yeshivat Slobodka, who was one of the greatest masters of Mussar of the generation. In Bnei Brak, as well, Rav Goldvicht, zt"l, was known as a prodigy, and would conduct Talmudic discussions which were attended by the elite of the Kollel members in the city, who were themselves to become renowned Torah greats.

In the year 5714, he was asked to establish Yeshivat Kerem B'Yavneh, and from its inception he served as its Rosh Yeshiva. Rav Goldvicht, zt"l, succeeded in establishing the Yeshiva to the degree to which it is now recognized among Yeshivot worldwide.

Rav Goldvicht, zt"l, originally conceived and implemented the Hesder program for Yeshivot, which integrates Torah study with active service in the Israeli army. In 5751, in recognition of this, he accepted the Israel Prize, the highest award given by the State of Israel for a major contribution to Israeli society. This acceptance was on behalf of the entire Yeshivat Hesder movement.

He established the Kollel program to prepare students for the Rabbinate and Dayanut (Judiciary), a program which has won acclaim in Yeshiva circles worldwide.

The Overseas Students Program was introduced by Rav Goldvicht, zt"l, more than half a century ago, and has allowed thousands of Diaspora Jews to advance their religious education in the Holy Land, and foster closer ties with the Land of Israel and its people. Over five hundred of these students have made Aliyah, making Israel their permanent home.

Today, thousands of Rav Goldvicht's students in Israel and overseas function as Roshei Yeshivot, Rabbis, and Dayanim, while many others are involved in the secular professions. They embody his value of Torah and sanctity in their personal and communal responsibilities.

In addition to his Talmudic scholarship, Rav Goldvicht, zt"l, was known as one of the deep thinkers in Jewish thought and theology, and was a renowned lecturer in these fields.

Following his retirement from the Yeshiva leadership, Maran Rosh Hayeshiva, zt"l, gave Sichot in homes of Yeshiva alumni and to different friends in the Jerusalem area. In fact, on the evening before his passing, he had delivered a Shiur in Har Nof to Yeshiva alumni.

During his last years, Rav Goldvicht, zt"l, wrote several Sifrei Kodesh in Halacha and Aggadah on the Jewish Holidays, and was preparing other Sfarim on Pirkei Avot, Parshat Hashavuah and Masechet Sanhedrin.

Maran Rosh Hayeshiva, zt"l, passed away due to cardiac arrest in his apartment in the Jerusalem neighborhood of Arzei Habira, on Tuesday morning, 7 Adar I, at the age of 69. His passing came after a difficult period of several months, when he was hospitalized several times.

Just before he passed away, the Rosh Hayeshiva, zt"l, requested an intensification of Torah study, in merit of his soul. This was his will at the time of his death, as well as during his lifetime: to increase Torah study and to facilitate the growth and glorification of Torah.