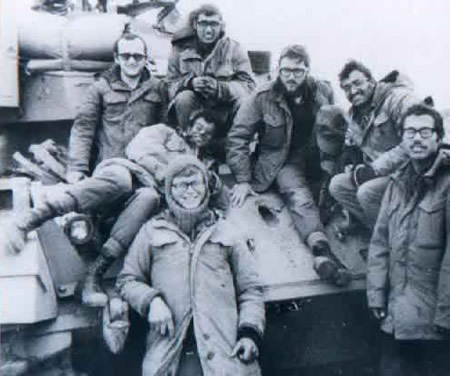 During times of war, Hesder students continue to serve in their uniquely dual capacity. During the Six Day War, the first-year students who had not yet beeninducted, as well as the foreign students, broke up into groups and staggered their learning hours to ensure that there would be students in the Beit Midrash around the clock. During their free hours, students dug trenches, helped young mothers whose husbands, Kollel members, had been drafted, and worked on nearby kibbutzim whose work force had been depleted.

Those on the battlefields nobly represented the Hesder ideal there as well. Students served mainly in the Paratroops, many in the unit which participated in the liberation of Jerusalem. When off duty, they tried to retain as much of the Yeshiva atmosphere as possible. Rav Goldvicht's addresses to the students were copied and sent to the Talmidim on the fronts, to strengthen their spirit as war approached and reinforce the feeling that their Yeshiva was with them wherever they served.

This feeling was demonstrated in a letter received by the Rosh Hayeshiva, zt"l, from a student on the front. It describes how Kerem B'Yavneh students organized a Shiur in Bava Metzia that was attended, for part of the period, by several non-religious soldiers. The Talmidim used their spare time to exert a positive influence on their surroundings wherever they were.

Another story, from the Yom Kippur War, serves to highlight the dedication of students of Kerem B'Yavneh, to both army service and Torah. Just after the first cease fire, many Ramim, including the Rosh Hayeshiva, zt"l, visited their students in the army. Among them was then Director Eli Klein, who flew to a tank base near Fahid, across the Suez Canal, where eleven Kerem B'Yavneh students were stationed. On arrival at the base, he only found ten of his Talmidim. The unit commander was certain that the weary soldier, off-duty at the time, was probably sleeping in one of the tanks. A search of the tanks was fruitless. When Mr. Klein entered the Beit Kneset, there was the eleventh student, sitting on an ammunition box, with an open Gemara. Opposite him sat another soldier, not religious, who was interested in learning. In the best tradition of Hesder, he was taking precious time from his rest period to teach Torah to another Jew.