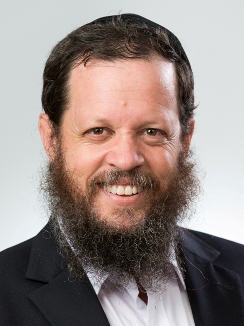 Rav Aharon Friedman shlita was born in Yerushalayim in 5735. He studied in the Ma’arava Yeshiva High School. In 5752, he began his studies in the Hesder program at Yeshivat Kerem B’Yavneh. He served in the artillery during his army service, and he presently serves in the reserves as a Battalion Rabbi in the artillery corps.

After his marriage, Rav Friedman continued his studies in the Yeshiva, completing his rabbinic ordination and continuing to study in the Kollel Dayanut. In 5768, he was appointed as a Ra”m in the Yeshiva.

Rav Friedman has served has the director of the Kollel Yom Shelishi program, with over 80 participants who come to the Yeshiva to study every week. In addition to his daily shiur, Rav Friedman delivers shiurim in Tanach to students. He also gives shiurim in nearby towns and in other programs.

In addition to his studies in the Yeshiva, Rav Friedman studied for six years under Rav Yitzchak Shlomo Zylberman zt”l, and he has studied Tanach with Rav Yaakov Medan, Rosh Yeshiva of Yeshivat Har Etzion, for over 15 years. Rav Friedman authored the sefarim BeHar Hashem Yera’eh (essays and derashot on Rosh Hashana) and Elef HaMagen (a commentary on the tefillot of the Ramchal), and he has published numerous articles in Yeshiva publications.